The Blues of Ultramarine

A hint of blue shadow over light blue eyes enhances the beauty of a woman beyond compare. If you have read about Cleopatra and Helen of Troy and other women who were famous for their beauty, you’d often read about “the blue shadow” they used to enhance their eyes that made them look more beautiful. Many have likened these blue hued eyes to the depths and beauty of the oceans. Have you ever wondered where does this entrancing shade of blue comes from? This shade of blue is commonly called ultramarine blue (UMB). Historically UMB was derived from lapis lazuli, which is a rare, naturally occurring mineral in some parts of the world. Historically ultramarine blue was more expensive than gold since the entire procedure of pigment extraction was quite tedious and time consuming and of course expensive. 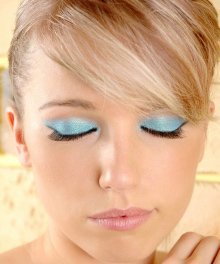 The word ultramarine is a derivative of the Latin Word ultramarines or further than the sea since this mineral was imported from Asia via the ocean route.

This blue pigment is made up of sulfides or sulfates and double silicate of sodium and aluminum. In nature, the blue healing stone angelite and the white healing stone selenite contain sulfides, but all those elements are found as one of the main constituents of lapis lazuli. History knows this pigment by a variety of names such as azzurrum ultramarine, azzurrum transmarinum, azzuro oltramarino, azur d'Acre, pierre d'azur, Lazurstein. Healing stones that contain just aluminum and sodium include kyanite, moonstone, sodalite, amethyst and alexandrite.

In the modern times this pigment is called ultramarine and natural ultramarine in English and outremer lapis in French and ultramarino verdadero in Spanish. The chemical structure of this pigment is quite complex with sulphur and sodio-silicate complex bonds. In plain language it is a limestone that has basically been mineralized. It has a mineral called lazuirite, which is one of the chief constituents of lapis lazuli. Most of the times chloride is present in the crystal lattice. The S3 radical anion has an unpaired electron, which is why the pigment is blue color.

Outremer Lapis was one of the most expensive pigment of its times. Primarily due to the fact that its extraction from Lapis Lazuli was a complex and tedious procedure. During the time of the Renaissance this pigment was more costly than gold. It was also used to adorn important paintings and statues of Christ and Madonna. Originally discovered in Afghanistan, people discovered the uses of this pigment. UMB pigment was extracted from lapis lazuli with wax and diluted bath of lye. Then these crystals are washed and collected.

Historically, ultramarine pigment made from lapis lazuli was used as an eye paint and eye make up. Egyptians used to use the pigment as raw eye powder or eye paint mixed with other colors. The raw powder was generally mixed with either animal fat or water and applied as a paste with a bone, wood or ivory stick.

Ultramarine eye powders were a rage in the ancient times as they had cosmetic and medicinal properties as well. They also had a spiritual significance since the eye make up also protected the wearer against dark forces and the evil eye.

Ultramarine pigment has generally been known to be a safe pigment since it does not have much heavy metal content and is non-toxic. This pigment is used in many applications such as eye shadow, mascara, violet lipstick, face powder and other facial make up for theatre and dramatics.

Ultramarine pigment was generally extracted from lapis lazuli, which is known as a healing stone. 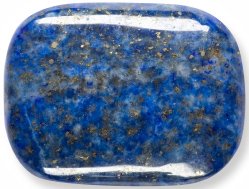 The natural process of formation of lapis lazuli is actually very interesting. This rock is a metamorphic rock that is formed by the solidification of magma under intense pressure, deep inside the earth. This intense pressure causes Lapis Lazuli formation.

This stone has been a favorite of many people through out the history due to its beauty and healing properties. Egyptians, Assyrians and Babylonians used it for various purposes. Romans believed that it was an aphrodisiac.

Lapis Lazuli is a healing stone that is also known as the stone of friendship and truth. It is also believed that this stone aids in meditation and creates a harmonies atmosphere where it is placed. Planets like Neptune and Venus are known to be associated with it. This stone resonates well with the Libra and Sagittarius Zodiac.

Lapis Lazuli is also beneficial for artists and writers since it helps in enhancing the creative side of the brain, it also aids in awareness and communication. Hence teachers and people in the field of education are greatly benefited by this stone. Lapis Lazuli also heals insomnia and depression. It aids in curing diseases of the eyes and the ears. According to Feng Shui, it helps in balancing the yin and yang energies. Lapis Lazuli is also used in amulets, as it is believed to have physical and psychic protective powers. UMB has become a hot favorite amongst consumers, while Lapis Lazuli’s popularity has also gained new heights. Many have realized the importance of the color blue since it promotes peace and serenity and have now started demanding this pigment in many areas of their lives. It is also widely used in mineral make up since it does not react much with the skin and is non-toxic. Lapis Lazuli is the new darling of Feng Shui and hence the consumer populus. Its healing properties are now known far and wide.