Amethyst belongs to the Quartz family. It is made mostly of silica which is and ingredient found in mineral makeup. It has a hardness of 7 and has a triagonal crystal structure. It can be found in a variety of shades of purple from light to dark purple. The color has its own special meaning. The color is primarily due to the combination of miniscule deposits of aluminum (a small amount of this element is found in Kaolin clay) and iron (also found in mineral makeup) along with natural or artificial irradiation. It occurs in the form of various sized crystals in a variety of locations like Europe, Unites States, Russia, Canada, Africa, Mexico, Bolivia and Brazil.

Amethyst has some very interesting legends and history surrounding its creation and various aspects. It was used by the Neolithic men in Europe around 25,000 B.C. It was made into beads and amulets by the Egyptians. It was considered as a status symbol amongst the rich and famous in the ancient Roman and Grecian societies. They used it in ornaments, crowns, rings and scepters of bishops. The high priest of Israel wore it as a ninth stone on his breast plate and the names of the tribes were also engraved on an Amethyst as well. The name of this stone is derived from a Grecian word which actually means “not drunk”. According to an ancient Grecian myth, when God Bacchus was insulted, he decided to vent his anger out by making his tigers eat the first person they could find. As luck would have it, a girl named Amethyst was attacked by these tigers when she was going to worship Goddess Diana. As a result, to protect her from the attack, Diana changed her into a transparent crystal. When Bacchus realized his folly, he poured the grape juice over the crystal which gave it the pretty purplish color. As a result of this legend, some people also believe that this stone helps in giving up drinking and also provides an outlet to vent the anger as well.

Amethyst is a great physical healer. It can aid in the treatment of all kinds of hearing problems. It can also help in correcting and setting an upright posture. It also aids in the stimulation of the sympathetic nervous system. It helps the endocrine glands and hormones to function normally. It can aid in curing problems related to skin, teeth, bones, digestive tract, heart and stomach. It can prevent stress related problems even on the cellular level. Many people use this healing stone to aid in problems like sleeplessness and reduce all kinds of pains from body to the head and the body. It can also work in the stabilization of mental disorders. Some people use it with elixir to heal problems related to arthritis. This healing stone also helps in breaking addiction. It breaks age old addiction habits and also prevents future addictions by modifying the thought processes of an individual. It is a stone that cleanses the skin which helps in dealing with acne. It’s a great stone to balance the brain and the nervous system. It can also aid in the treatment and symptomatic relief of nerve disorders, brain imbalances and tinnitus. It helps the body to absorb and assimilate more oxygen and also helps in elimination of the waste matter included gasses in combination with magnetite, hematite and other stones which are high in iron content. 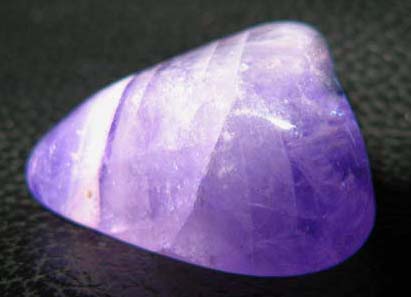 The Stone of Meditation

People who want to meditate but are unable to enter that meditative and peaceful state can greatly benefit from Amethyst. This stone is called the “stone of meditation” since it aids in opening up the crown chakra and also enhancing the calm and peacefulness associated with meditation. This stone can also give powerful protection against all kinds of psychic attacks and transform the negative energy into positive energy and transmit it to the universe. It makes the person serene and composed and helps them to manage all their responsibilities with skill and ease. It helps in calming the temperament and enhances the common sense in the individual. The presence of this healing stone is also known to enhance the business.

Amethyst is a great balancer and helps in balancing the physical, emotional, spiritual aspects of an individual. It’s a spiritual stone which enhances the feeling of contentment in the individual. This stone is a must for the people who work with light and helps in connecting a person to the spiritual realms while enhancing their mental, psychic and intuitive abilities.

back to the top of amethyst page

Shop 24 Hours a Day! Visit me, your Independent Beauty Consultant.
©Copyright 2008-2017 Essence-of-mineral-makeup.com The stones featured are associated with the minerals but may not be their actual source in mineral makeup but are believed to harmonize ones life. There is no guarantee in healing.