Prussian blue, Berlin Blue Paris Blue, Hamburg Blue, celestial blue, bronze blue, cyanine, blue, potash oriental blue, and Harlem blue are just some of the names referred to Ferric Ferrocyanide. It is an inorganic compound that is known for its dark blue appearance. In demonstrating properties of ferric ion, Ferric Ferrocyanide is also known as the antidote to chronic Thallium poisoning. The compound is also used in other industries, particularly in the cosmetic industry. Because of its distinct blue pigment, it is commonly used as colorants. In cosmetic products, Ferric Ferrocyanide is used in various formulations of makeup, hair coloring products, bath products, nail polish and other skin care products. Evidently, the wide use of the compound in personal care products bespeaks the significant benefits of its applications.

Although these stones may not be blue, they contain iron and oxygen and include red jasper, brecciated jasper, hematite, moonstone, colored aventurine, franklinite, amethyst, rhodonite, serpentine.

Ferric Ferrocyanide or Fe4[Fe(CN)6]3 is literally comprised with dark blue crystals. To produce blue ink, it is mixed with oxalic acid. In aqueous solutions, the compound is relatively unreactive. It is rather more effective of a pigment in dry palette as in pressed powders and in oil based colorants. 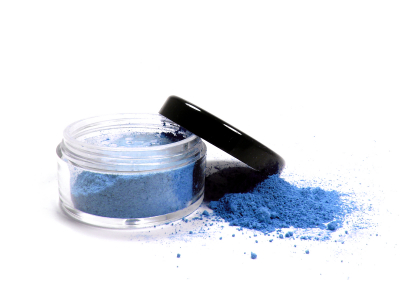 Ferric Ferrocyanide or Prussian blue was actually discovered by accident. In the early 18th century, a German color maker, Diesbach, produced a nice red pigment out of potash or Potassium. One day, he bought potash from Dippel. Dipel gave him adulterated potash. As he prepared a cochineal decoction out of the potash he bought and mixed it with Iron Sulphate. To his surprise, the concoction produced a superb deep blue color. So he turned to Dippel to understand what just happened. Dippel, finding fasntastic business opportunity out of the discovery, have refined Diesbach’s recipe and came up with deep and solid blue colors. During those times, a deep blue pigment was something that artists had not yet discovered. Also, due to the difficulty of finding such a pigment, commercially sold blue pigments were expensive. The discovery of Ferric Ferrocyanide in Prussian blue offered cheaper alternatives for artists and dyers. The discovery has greatly contributed to the popularity of blue in European cultures.

Due to the different locations on which the pigment was produced, Ferric Ferrocyanide was called a number of names. Even the process of its manufacture differs from one location to another. However, iron blue has become the pigment’s generic name. Different iron blue hues are produced by different processes of manufacture. As for the Prussian blue, it is often associated with Ferric Ferrocyanide because their chemical structure is closely similar. Prussian blue is actually available in two forms; the insoluble polymeric Ferric Ferrocyanide and the alkali Ferric Ferrocyanide. As an inert transition metal complex, the compound has an electronic transition of low-spin Fe2+ ion in a carbon-coordination center to a high spin Fe 3+ ion in a nitrogen-coordination, which occurs when visible light is absorbed in its 680 nm particle size.

Generally, the compound dissolves well in concentrated mineral acids but is resistant to diluted mineral acids, polar and non-polar fatty acids, solvents, drying oils and plasticizers. As a colloidal aggregate, Ferric Ferrocyanide can be finely divided, acquiring a characteristic that is close to the characteristics of a dye. The great chemical and physical properties of Ferric Ferrocyanide make it a common pigment used in cosmetic products such as mineral makeup lines.

In creating a wide spectrum of blue colors, the compound brings significant improvements to the optical properties of mineral makeup. This finely divided mineral ingredient delivers distinct properties of imparting color. The compound is used in manufacturing blushes, eye shadows, lipstick, nail polish and other colored palette. The compound is basically manufactured from elements that are sourced from the earth. Its natural and inorganic properties make it the perfect alternative to chemical-based and often harsh synthetic blue colorants.

Blue Healing Crystals and Pressed Powders: More and more mineral cosmetic companies are popping out each week, riding with the sales advantage of the bandwagon concerning the significant benefits of mineral makeup. So when choosing a mineral makeup product, it is wise to take notice of the labels to make sure that the product does not any ingredient that on which you may have allergic reactions. In the case of Ferric Ferrocyanide, the ingredient is FDA approved for use on pressed powders, shadows, blushes, mascara, and nail polish. FDA emphasizes that Ferric Ferrocyanide is safe for external application. FDA does not approve the ingredient’s use on lipsticks or any product that is meant to be applied on the lips due to the possibility of ingestion. For safety and public awareness, FDA imparts a strict rule of including Ferric Ferrocyanide in the list of ingredients of makeup lines that contain the ingredient.

Back to the top of Prussian Blue. Back to the Natural Benefits of Mineral Makeup.

Have A Great Story About This Topic?

Do you have a great story about this? Share it!