Anyolite is listed as the combination of zoisite and ruby. It is actually formed from the crystallized masses composed of ruby crystals that ate embedded in green zoisite. Hence, this resulting mineral stone adapts calcium aluminum silicate properties, being formed from prismatic crystals and massive columnar and granular habits. Calcium is a mineral found in mica of mineral makeup. Aluminum is found in kaolin clay of mineral makeup, and silica is an important mineral ingredient as well. Anyolites are usually found in India. They acquire a beautiful color of deep red in stark contrast with the leaf-green tone. The color combinations vary from red flecked and leaf-green to black or deep red flecked and greenish tone. Every color has its own special meaning. 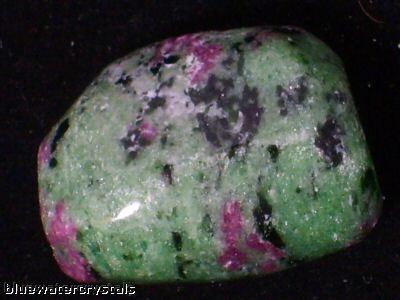 This mineral has masses of prismatic crystals that combine the physical properties of zoisite and ruby. Its zoisite composition becomes the base while its ruby properties are scattered throughout the structure. This combination results to highly energetic properties that can decompose negativity or transmutation of negative energies and turn it into positive energy force-fields. The resulting energy, in totality, enables positive forces to overwhelm negativity. This attribute enables Anyolite to amplify an entire field of a body. With that, it has exhibited significant healing properties, which are used for diagnostic healing on Aryuvedic and other Asian healing practices and in dealing with spirits. In transmuting negative energies to positive ones, it transforms destructive urges into constructive ones. Hence, this stone can bring about repressed feelings and emotions to encourage clarity in mind and better focus.

Anyolite is known for its ability to increase one's awareness on his individuality. It maintains connectedness to one's character, to work out and accept flaws. It also enhances the body's contact with etheric elements, which are beneficial in stimulating a powerful crown chakra towards spirituality. In linking these two altered states of consciousness, it allows a person to discover and utilize his abilities and talents. This mineral stone basically consolidates all energies to stimulate an overwhelming positive force field to block negative perception on one's physical as well as spiritual being, which tend to diminish physical vitality.

The combination of zoisite and ruby creates a truly fortunate natural mineral that emanates energy and positivity in all aspects of life. It promotes fertility as it supports the reproductive process on all levels, from conception, birth to growth and development. With that, it safeguards one's physical being by limiting or controlling the damage momentarily caused by negative elements such as sickness, pain and depression. It helps increase the understanding of oneself and the world. It awakens spirituality by strengthening the neural and energetic connections between the mind and the body. In helping the body regain control over its urges, it aids in making favorable decisions that benefit one's spirituality and overall well-being.

In many ways, Anyolite is magical. To utilize one's talent and mind abilities, its ruby and zoisite composition delivers the force that fires up courage and passion. It stimulates the root chakra to increase vitality and enthusiasm for life. Living with the zest and intensity of life is more satisfying than constantly ‘playing it safe' as it keeps life far from suffering emotional and spiritual stagnation. Its celestial latitudes facilitate advancement with healthy risks that makes life dynamic, fuller and healthier. You may even be wearing it and its properties on your face when you wear mineral makeup. Many other healing stones and their meanings can be found here.

back to the top of anyolite page