The Greeks called Amber “elektron” a terms which refers to the sun. A natural organic material which is a blend of natural botanic resins such as fossilized tree sap, it is essentially a mix of hydrocarbons and has a hardness of 2 to 2.5. Classified as an organic sedimentary stone with its own crystal meaning. It’s an amorphous crystal structure with no one mineral that you find in modern day mineral makeup - you may find some with a color with the name amber. The name Amber is derived from the Arabic word “ambar” which denotes a discharge of the sperm whale with similar color. Many mineral makeup use the name amber to describe their warm yellow/orange colors. An example is Amber Blaze, a pressed mineral powder eye shadow, picture of which can be found here:

Ambar can be found in yellow, brown or reddish brown color tints and is generally transparent. Usually, one gets to see fossilized bits of animals and plants in amber formations which date back to more than 120 million years. One of the best varieties of amber is the Baltic Amber which owes its existence to the resins of coniferous trees which were found 30 to 60 million years ago. People have used amber for jewelry and ornaments throughout history. Ancient Egyptians have used amber for many centuries and many Ambar beads have been found in Crete. The Europeans revered the rosary beads made of Ambar so much that there was a dearth of these beads. 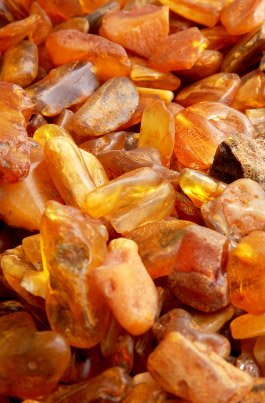 Legend has it that Ambar was created when the son of the Sun God was killed by lightening and his sisters grieved so much that they turned into coniferous trees and their tears turned into Ambar. The Native Americans and the East Indians revere Amber as a sacred stone. It was burnt as a fumigant and incense to cleanse the environment and also used in many kinds of fire ceremonies of the ancient tribal healers. It was also worn by the high priest on his breast plate as a status symbol. It was also believed that Ambar brought good luck to warriors. It was even used as a symbol to renew marriage vows and assure promises.

Physically amber enhances the energy levels and vitality of the body. It also helps in curing and drawing out infections and also prevents them from reoccurring. It can help in the stimulation of body functions which are slow and sluggish due to any reason like the digestive system, gland function and other organs. In case of invasions by the entity on a person’s body, amber can aid in sealing the aura after the entity extraction from the body and cleansing the residual negative fields which may cause a re-occurrence. It also helps people who suffer from disorders related to light deprivation. Ambar is useful in the treatment of throat related disorders like goiter. And because it is fossilized tree resin, it could be associated with limb casts which help in the vibrational issues of bursitis. It also helps in problems related to the bladder and the kidney. In the olden times, it was used akin to a penicillin type of remedy which was ground and soaked and drunk due to its medicinal properties. Ambar also helps people in recovering from illness and injury.

An Essence of Prosperity

Amber gets its energy from the sun hence it gives us more warmth than light. It gives a sense of health, warmth and well being to the wearer. It helps in enhancing the long life of a person and hence is often worn by the elderly. It helps people to manifest prosperity and is particularly effective in combination with other stones of prosperity like Yellow Sapphire, Tsavorite and Moldavite. It also helps in protecting from negativity, enhances health and purification in combination with Jet. It helps in transforming negativity into a source of clear energy and hence works well as a protection stone.

Amber can help in clearing family patterns since it helps one in understanding one’s lineage and genetic lessons and the experiences passed on by the ancestors. It helps in creating the karmic debris and also helps in understanding and clearing the past life patterns. It’s a great companion and protector in shamanic journeys due to its ability to help in traveling to the lower world.

Since Ambar is formed directly from the light’s synthesis with the trees and plants and the life force gets trapped in it, it’s a great source of light energy. As a result Ambar can help in communicating with intergalactic and interdimensional light beings like faeries, crop circle makers and nature devas. It is particularly associated with Ra, the Egyptian deity.

Amber is the astrological stone for Leo and Aquarius. It’s associated with the earth element and vibrates to number three. Amber corresponds to the third chakra or the Solar Plexus.

back to the top of amber page