Mother Nature has a solution for everything. Whether its diseases or protection against the dark evil spirits, there is a cure for all sorts of problems in nature. Amongst the many protective stones and minerals provided by nature, Agate is well known for its protective qualities. This stone was worn as the “truth amulet” in olden Rome. The Romans used to also wear it to get an abundant harvest. It was also known to protect the wearer against snake bite and was particularly effective when engraved with a snake. Agate was quite a status symbol in the days of yore since it was worn by the high priest on his breast plate. The old age physicians used to treat people with agate by putting it in their drinking and cooking water. This stone is named after the Achetes River in Sicily where it was commonly found. According to the history records, Agate was used by the Neolithic people and ancient Egyptians prior to 3000 BC. Records also show that it was used for jewelry in ancient India. It is also one of the main stones found in Germany and hence is the basis of their stone cutting and polishing history from the ancient times till date. A variety of Agate is also found in Botswana which is used for a lot of healing work.

A cross section of an Agate Stone (picture from wikimedia): 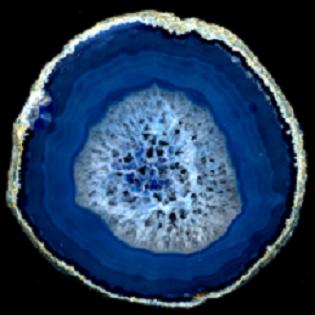 Structurally speaking, Agate belongs to the quartz group (related to silica or silicon dioxide ) and is known as banded chalcedony . There are many different types and colors of agate each with their own unique healing abilities in addition to agate in general. These include: blue, blue lace, dendritic, fire, gray-banded/Botswana, green, moss, pink, red, red-brown, snakeskin and tree. Agates molecular structure is triagonal crystal with a hardness quotient of 6 to 7. It resonates with all chakras and the zodiac sign Gemini and the number 7, but these vary according to color and type, and the planet Mercury.

Agate has been used by the metaphysicists across the world for cleansing and stabilizing auras. It works on the intellectual plane and provides mental, physical and emotional balance to the wearer. People who are weak emotionally or mentally or who are unsure of their life and path can benefit from this stone. It soothes people who are hypertensive and easily excitable. If you are scared of speaking out the truth, Agate is your stone. If you have been jilted in love and feel that you have been scarred for life, then Agate can heal your anger and help you to start life all over again. Known for balancing the yin and yang of our lives, Agate aids spiritual growth. Moss agate is a stone of new beginnings, representing stability, persistence and grounding. 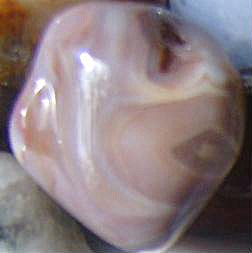 Agate has the ability to draw inspiration from great spiritual entities which reside in the spiritual world. It can help you to become more perceptive and even discover your real potential. A special type of Agate is found only in Botswana and is known world over for helping smokers to quit smoking. This Agate helps people to focus on the solution rather than the problem and discover new ways of enhancing and expressing their creativity. Since this stone is known to stimulate the crown chakra it helps in alleviating depression. Physically it helps to heal and enhance the circulatory system and skin and enhance the oxygen intake of the body.

The famous proverb “slow and steady wins the race” can be used for Agate since it slowly but surely helps people to overcome the negativity and the bad experiences of their lives. It helps them to have a clear perspective and contemplate their aims and vision. Agate is indeed a soul guiding stone which helps people to move ahead in life!

When wearing mineral makeup, you may even be wearing agate rock minerals and its properties, on your face.

Many different colors exist and you can buy them through mineral zone.

Shop 24 Hours a Day! Visit me, your Independent Beauty Consultant.
©Copyright 2008-2017 Essence-of-mineral-makeup.com The stones featured are associated with the minerals but may not be their actual source in mineral makeup but are believed to harmonize ones life. There is no guarantee in healing.